I hope PI doesn't take any offense to this. I am a long time fan of LW/LW2 and XCOM and have been developing my own tactical turn-based game. I'm a solo developer so whilst it is a daunting task it is also something I am extremely passionate about. If you guys are interested in seeing some early footage, please have a look at my youtube video

Hey guys, whilst busy preparing the combat demo, I've managed to hire a modeler to do a few armor sets and weapons for me. I'd like to give you guys a quick preview of some of the armor sets I've done. I've gone with a more grounded and realistic approach to armor. Also no boob armor, not negotiable

To round everything off, an example of armor progression for the first 3 sets in Dead Monarchy. Quite happy with the variety I got from only 3 sets

Just a small update on the interface again. Added some additional headers, change some statistic names and the main thing is I've done the tooltip for the items. Once again some of the stuff, including descriptions, icons (plate icon - lamellar name) and item effects are placeholder. Quite happy with the progress on this interface, to me it is something that can definitely make or break a game. I've been tinkering around with dismemberment and decapitations to bring a more visceral feel to the combat. Dismemberment and decapitations will also have an effect on morale but are quite hard to pull off. Once again this is still early testing and everything is subject to change but I'd like to say that dismemberment and decapitations will be in, in some form or another. Also the "gore caps" as I like to call them are not finished, which is why you can see inside the head/neck or waist. I'll scrounge up some textures later and fill in those gaps later on. Also don't pay any attention to the environment, I'm in the middle of migrating my game to a newer version of Unity. I've also zoomed the camera in further than it it is normally, just to show everything off.

Also, another set has come through and I've ready to show it off. The great helms have quite a lot of variation, there will be plain great helms, decorated helms (with rings) and fully decorated (with helmet piece and rings). I haven't settled with the naming convention, but just wanted to point out the modular nature of some of the armor pieces. I've settled with 3 slots for armor, Head, Body and Legs. The reason why I've gone with this is because the armor zones tie directly into gameplay as they are each a stat and that stat represents the durability of each piece.

More details will come as I come closer to the demo, the other reason why was there was too much clipping with some existing sets and I would of had to rework a lot of the base meshes to avoid clipping. It got to the point where armors looked too similar and lacked striking/prominent features as too much emphasis was placed on not having armors clip. That said, I think there is still enough base variation with 3 slots also the individual pieces like shoulders and wrists will be bundled together with chests, so within base sets there would be progression within it as well. IE chest, chest with gauntlets, chest with gauntlets and shoulders.

Hey guys, demo build 0.2.0 has been released on IndieDB! As always, I'm open to all feedback. Be as blunt as you like!

Info on the demo:

There's going to be more updates from now on. They'll be smaller updates, but I'll be posting every week now. Every Wednesday, I'll showcase a new armor set and every Saturday, I'll showcase a new enemy. Also, I'm going to try for a new devblog every month. Some of the armor sets you might have seen already but in most cases they've been slightly edited to fit the new armor system. I'll be showcasing all the armor sets in the "cloth armor" tier for a couple of weeks. There will be extensive customization options in Dead Monarchy but I won't spoil it all, I don't plan on showcasing any of the legendary armor sets.

A quick review of how the armor system works. You have two armor slots, helmet and armor (body). Each armor piece protects against attacks that are aimed towards the head or body. Helmets can be permanently lost if completely broken, armor will just be unable to be equipped again. There will be around 10 tiers of armor, but within each tier of armor there will be several variants. Some variants will just be retextured, but others are completely different models. I think this strikes a nice balance between improving your gear but also giving you options of creating unique characters.

Here's the first monster reveal. I'll be going into more details in each faction reveal, when all monsters are covered for each specific faction. For now though, here's a few screenshots of the "Rodent Gunner", something that never got the spotlight a couple weeks back.

The majority of knockback abilities are all done within melee distance, so 1 tile away. The gunner likes to keep enemies at a distance but it can also be used aggressively to disrupt formations, knocking your units back, away from allies and exposing their flanks.

Here's another monster reveal for the Rodent Clans.

Monster Name: Rodent Stalker
Special Ability: Quick Step, an ability that allows the user to disengage from melee combat without triggering an AOO (Attack of Opportunity).

By default whenever a combatant disengages from melee distance, that combatant will be subjected to an AOO. AOO attacks will bypass helmet/armor rating but only deal half damage, that said it is still extremely dangerous. With the Quick Step ability, the stalker will be able to quickly flank and move around enemies without being subjected to an AOO attack. Flanking an enemy from behind also grants several bonuses which include increase hit and critical chance and also a flat damage bonus of +5 which will bypass armor. In short, the rodent stalker is a highly mobile flanking unit.

Been a couple busy weeks so haven't had the time to post all the updates, here is a compilation of these two weeks. I'll be showing off the remaining cloth armor models 8-10 and two new enemies from the Rodent Clan.

Monster Name: Rodent Shaman.
Special Abilities: Mend Wounds, a single target ranged heal ability. Power Bomb, filled with all manner of hallucinogenic substances, this ability has a chance to stun the target or buff the target's.

Healing isn't really a common occurrence so these creatures will probably start to become high priority targets. Powder Bomb as you may have noticed can backfire and boost your own characters, which I thought was quite thematic to "ratmen". Overall, I'm trying to make the Rodent clan focus more on displacement and crowd control in terms of this faction's main theme/playstyle.

Special Ability: Sunder Strike, double damage if the target is stunned. The damage applies to both armor damage and "health" damage.

The solider forms the frontline of the Rodent Clan and combines well with the Shaman. If a target is stunned by the Shaman, Sunder Strike will deal damage whether it be "health" damage or damage to Helmet/Armor rating. If you want to get to the Shaman, you'll have to get through these boys first. The soldier will also be the most heavily armored unit and the only rodent to carry a shield into combat.

I've got an update out on indie DB detailing the current development situation of Dead Monarchy. It covers all the major features I've implemented so far and what you can expect in the early access version. Hoping to release into early access somewhere towards the end of the 1st quarter this year. After releasing the EA version, I'll also release an updated demo. The update is mostly text but there is a new armor set though

After 7000+ hours, I am finally at the starting line. The store page is now live and Dead Monarchy will be heading into Early Access soon. You can wishlist the game at: 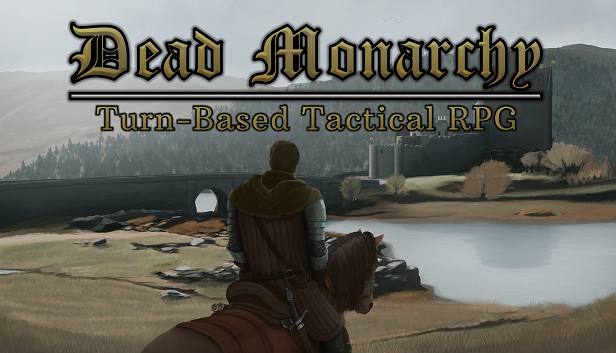 Hey guys, just wanted to drop in and say that Dead Monarchy will finally be releasing into Early Access on June 18th, 10:00am PDT. It will be $10 USD with a 10% discount for the first week.

Build 6, the initial world map update has now been released to the experimental beta branch. It is a huge update that will require quite a bit of time to get right. Dead Monarchy is now also 25% off!